since this is tokyo wouldn't rice paper texture fit better than simple paper? or perhaps a sheet of nori...
“In the beginning God said, the four-dimensional divergence of an antisymmetric, second rank tensor equals zero, and there was light, and it was good. And on the seventh day he rested.”- Michio Kaku DiM wrote:since this is tokyo wouldn't rice paper texture fit better than simple paper? or perhaps a sheet of nori...

I assume the population bonus comes into effect for all regions when a landmark is held? I noticed Suburban Tokyo has no landmark.

-Sully
Beckytheblondie: "Don't give us the dispatch, give us a mustache ride."

Scaling back on my CC involvement...

I like the direction the graphics are going with this map, I think you'll end up with unique graphics.

I disagree with the suggestion to add anymore texture, specially a paper texture. In my opinion the current texture and colouring is perfect and give a sort of manga/comic book feel that you sometimes get with the Japaneses.

I would vote for the texture to remain as is.
What do you know about map making, bitch?

Hmm... I dunno how I like the slanted lines contrasting against the dots.

But anyway... you should include the Tokyo Skytree and preempt its completion next year. I mean, its quite huge and I think maybe a better choice than the Asahi beer hall. Or, you could do both. Your choice. I just see the Tokyo skytree all the time and find it strange its not on the map.
Sketchblog [Update 07/25/11]: http://indyhelixsketch.blogspot.com/
Living in Japan [Update 07/17/11]: http://mirrorcountryih.blogspot.com/
Russian Revolution map for ConquerClub [07/20/11]: viewtopic.php?f=241&t=116575

And I will switch the Asahi Beer Hall for the Tokyo Skytree. Haven't been to Tokyo since before the Skytree began construction, so had never heard of it! You surely know Tokyo much better than I do (I lived in Osaka), so if anything else seems sorta off, it probably is and you must tell me to fix it

Gimil, MrBenn, DiM - believe it or not, there was a paper texture under there! The difference between Jul 10 and 11 was I had the texture turned off when I exported Jul 10. On 11, you'll see the texture most obviously in Old Koto. It seems it's too subtle to hit MrBenn's radar, yet subtle enough that Gimil already thinks it's fine. If I need to just up the contrast on what I'm already using, that can be done. Here's the map with the rice paper texture so you know what it looks like, but I prefer the subtler texture I was using on Jul 11:

Sully - That's correct. I've changed the wording to "when any landmark is held", hopefully it reads more clearly now.

I prefer the older texture myself. That said thou, their isn't anything wrong with the new one either.
What do you know about map making, bitch?

gimil wrote:I prefer the older texture myself. That said thou, their isn't anything wrong with the new one either.

The previous texture you had was virtually invisible; the current one is probably too visible... I'd suggest something between the two, but nearer the previous version with the texture barely visible.

gimil wrote:I prefer the older texture myself. That said thou, their isn't anything wrong with the new one either.

The previous texture you had was virtually invisible; the current one is probably too visible... I'd suggest something between the two, but nearer the previous version with the texture barely visible.

What he is saying, is that your porridge isn't just right yet.

I don't think I have a preference on any of the textures.

Here's with MrBenn's Sugar Paper he liked. It's got a bit more fleck to it than the one I was using. 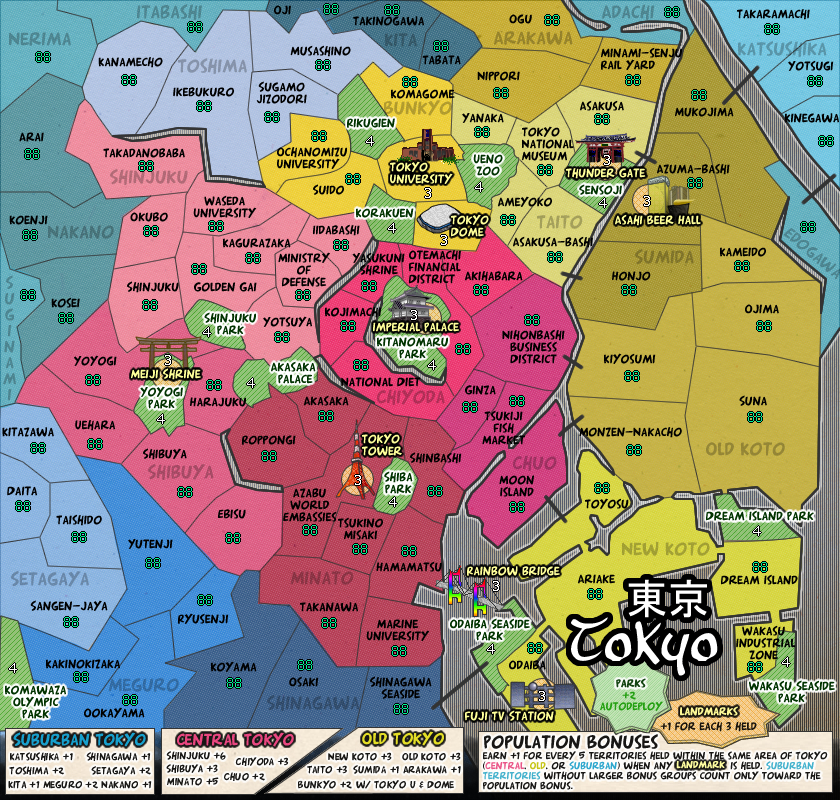 It makes me feel like I need to clean my monitor or something.
Current Map Project: Tokyo

shakeycat wrote:It makes me feel like I need to clean my monitor or something.

Agreed. I'd either stick with your original version (with my apologies for wasting your time), or switch to a reduced opacity version of the ricepaper one.

We don't know until we try

So we'll stick with this then: 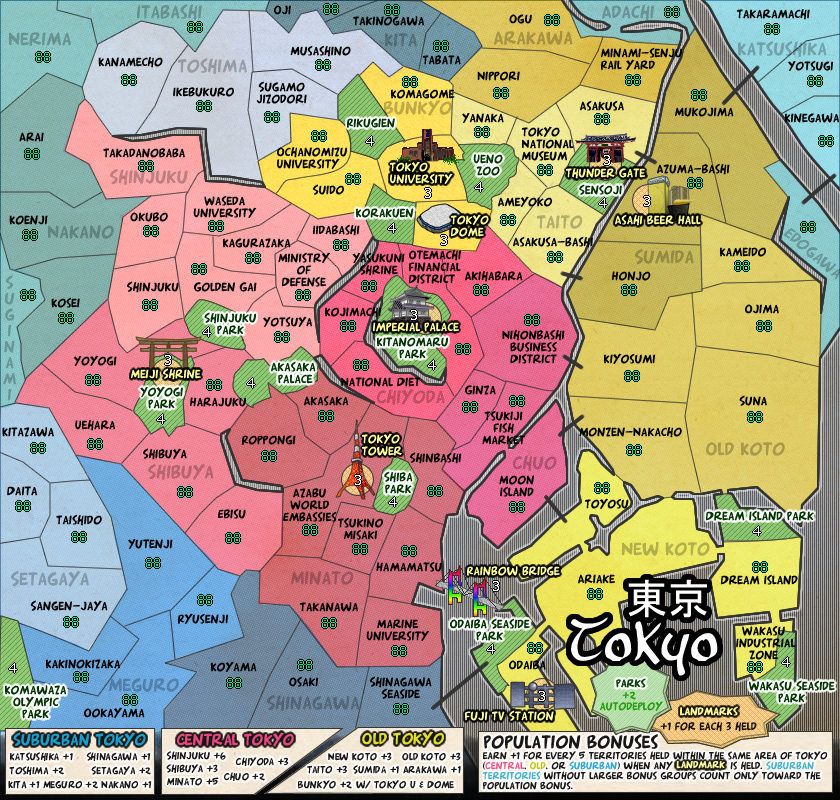 zimmah wrote:Cant really say which one is better from my iPhone so i Will watch On my pc later and give my opinion About which one i think looks best

You'll know when you start smudging up your screen with fingerprints, trying to get the pesky dust particles off

it almost makes me want to use it as a texture!

It's so subtle though.

zimmah wrote:Cant really say which one is better from my iPhone so i Will watch On my pc later and give my opinion About which one i think looks best

You'll know when you start smudging up your screen with fingerprints, trying to get the pesky dust particles off

it almost makes me want to use it as a texture!

It's so subtle though.

the second one looks good but there's a line at the hight of nakano, that splits the map in half. the upper half looks about right, everythng below that line is too bright.

I definitely like the second one, easy on the eyes. Love the gameplay, and the theme style. Should be a lot of fun. I do faintly see the line zimmah mentions, but it's pretty hard to notice.

Updated first post with this one as our working copy:

What's next? Any gameplay issues need clearing up? Does everything make sense? Are bonuses fair, neutrals high/low enough?

Remember, we were going the no-bonus start route. So players get the region bonus as always, but will need to conquer a landmark before their population bonus kicks in. The initial post outlines starting positions to prevent dropping with small bonuses in 2 and 3 player games as well.

Let's assume the logical first move is to take a landmark and start earning extra (numbers are in the initial post), which would be a minimum of +3 in a 1v1. Will either the first or second player be at an unfair advantage? It will probably take some thought as to which landmark to take first, preferably one the other player is nowhere near. Also, if a landmark inside a park is held, the park will build up by +2 every round and protect it for you and ensure your bonus.


Also, I still have to change the Asahi Beer Hall into the Tokyo Skytree. Will see if I can change the style of landmarks to make any more manga-ish, and will definitely make Tokyo Dome less ugly.
Current Map Project: Tokyo

I do have to say I like the aesthetic on this map. Lovely color palette that certainly brings the sheer garishness of modern Tokyo to a map. So I've got a few nitpicks to work out the kinks:

- The left leg of the Tokyo Tower looks deformed compared to the other two. I tried altering my perspective, but it was still that way. It's leaning too far left.
- The black lines look silly compared to the Rainbow Bridge landmark. Perhaps consider making them generic bridges instead of lines?

Clarity-wise, just two things:
- The parks/landmarks bit is almost too close to the map proper. Perhaps consider boxing them off or relocating them a smidge? At first I thought they were legitimate territories.
- The bonus values seem all over the place. Excuse my ignorance of the bonus structure in relation to population bonuses, could you get me a table of what adds up to which? Right now I feel like the individual suburbs are undervalued and central Tokyo is slightly overvalued.

I would also suggest making road part of rainbow bridge much darker than the current shade of grey. At the moment it doesn't look right imo.
What do you know about map making, bitch?

The map is looking very stylish.

Now some critique: The legend is a bit cramped. Make the four boxes more aligned. The distance between Central and Old is not even, make it the same angle by moving Old Tokyo to the right.

Also the legend of Parks and Landmarks is not really visible. You could make the background white just like the rest of the legend.

With population bonus you mean +1 for every 3 regions? Making a separate legend box for landmark influence and population could make it more clear.

Sorry for the long delay, shakey... I was unavoidably unavailable

Anyway, it seems the map has flourished in my absence. Your numbers for the map are doubtless correct, I was afraid that I might have counted a couple of bogus regions when I assumed that Tokyo U and the Tokyo Dome also had a pop. region to go with them instead of being single regions in their own right. With those fake 2 regions gone from my count, my numbers would match up with yours.

Going the 'Activation' route should make the gameplay easy to balance- you were wise in your consideration of the 1st-turn advantage in 1v1 games.

As for the 3-regions bonuses, I have no strong opinion one way or the other at the moment as to using starting positions vs. neutrals. Maybe if I crunched some numbers to see how it affected deployments... Anyway, the consolidation of the 2-region bonus areas into 3-region areas is a big improvement, and the even bonus across the board appears to me a Good Thing.

I wouldn't make the landmark neutral values too high, perhaps no higher than 5. Anything higher and the bonus for multiple landmarks will effectively be ignored, as well as possibly the pop bonuses until late game (unless that's a desirable outcome, in which case 6-8 neutrals should do).

As for clarity, this map is a 100 times better.

I think you can use more color in the legend to help out a bit, using the individual shades of yellow, blue or magenta for each bonus area with its corresponding listing in the legend. Also, the shade used for the 'pop-bonus only' suburban areas I feel should be as distinct as possible while still being bluish. That way, when it gets mentioned in the legend, the color can be more recognizable and easier to match with regions on the map.

I agree with Tack that the legend that describes the Landmark and Parks bonuses needs to be separated more from the map proper... it blends in too much right now.

As for the value of the various bonuses areas, and pop regions, I'm fairly satisfied that while the Central Tokyo region clearly has the biggest potential, that fact is balanced by the ease with which the Suburban bonus areas can be snatched up in the early game. Considering how wide open most of the bonus areas are on this map, the Suburban bonus areas might actually be preferred as they are all around the edges of the map. However, it couldn't hurt to do some digging to break down exactly how much each bonus area earns if a landmark is held and the pop bonus is active. Obviously, the Central Tokyo bonus areas will get the biggest boost, since they have the most regions.

Thanks for putting your numbers on the first post shakey, this map thread is aces.

The theme is good. Tokyo is an interesting city to make a map of since it stretches out like a big circle. I think you can make a very visually pleasing map out of this idea but graphics has to be top notch!