Map suggestions, ideas and drafts... They all start life on the Drawing Board.

Map Name: Paris
Mapmaker(s): GeneralFault (for now)
Number of Territories: 100
Special Features: Landmarks are the key to the map
What Makes This Map Worthy of Being Made: I have seen a lot of attempts to create a map of Paris but so far the results are very small.
I would like to make another attempt. Worthy of beeing made? Well Paris has an unique structure that is suitable for a very fun map. Together with the many attemps and wishes of the CC community, it has a birthright.

According to the Foundry Rules provided here: http://www.conquerclub.com/forum/viewtopic.php?f=649&t=150681. I created a few chapters to comply to all demands. Therefor I decided to build my post according these rules. Please help if I missed something

Copyright Agreement:
The author retains copyright on their work, and gives Conquer Club permission to use the imagery free of charge, for as long as Conquer Club sees fit on the Conquer Club website. Conquer Club cannot sell, lease, or lend the right to use the images to anyone else. The author swears that their map is their own work, or a legal derivative work and by submitting it, do hereby claim all responsibility for that being true.

Request asked to thenobodies80 to use a super sized map according to the http://www.conquerclub.com/forum/viewtopic.php?f=10&t=182136 super sized topic....

The nobodies80 has in his signature:

I do NOT visit this site and I'm NOT Team CC anymore.
All PMs are autobinned.
If you need to contact me, you should already have a way to do it without using this site.
Thanks to those who helped me through the years.

so that's probably not the correct way...

By the cartographers group i saw two members: iancanton and ManBungalow, so i forwarded my message to them.... hopefully with a reaction

as u might know, we are currently accepting maps that do not have classic or near-classic gameplay. i believe that the gameplay here is very close to not qualifying.

although u have applied for supersize, u haven't said what size u need. why do u need to increase the size? this is ur first map, so how confident are u that u can finish a supersize map, when so many have failed with a normal one?

nevertheless, this is an excellent start and i have moved the map to the drafting room.

@ iancanton: The gameplay of the map is based on Classic. The exception is that all landmarks can attack eachother, and therefor it is different. In the game this should result to much more difficulty to hold any regions or bonusses. Any improvements on gameplay, I gladly accept them....

Supersize: my map is based on the biggest limits:

I'm confident i can finish a supersize map, because besides my still improving skills as a designer, i'm foremost a developer of origin, so i cannot see any difficulty in developing the XML-file. Yes it is my first map..... So any help and guidance is always welcome... Perseverance and stamina!

I ran a color blindness check at http://www.vischeck.com/vischeck/vischeckImage.php

and the results are:

I think you should fill up the background with one colour per arrondissement. The way it is right now. It's too hectic.

thanks for the update of waauw and Teflon Kris !!

Nice map! I'm happy to see somebody making a Paris map. I think it deserves to be made.

Here's a bit of feedback to move forward - use colour to break the map up a bit into categories. You have landmarks, quarters and districts - those are categories in the sense that I am describing. Right now the only way that we (the player) can understand this is by reading the region name; if you implemented a colour system (or another system) we could understand this visually and it would be intuitive. As there is a landmark in every district (correct?), they could make themselves known more and could maybe be colour-coordinated with the district that they sit inside?
I would also make the district lines thicker and more obvious. Also, since there are a lot of lines on the map that are being used to direct gameplay, perhaps you could play with stylising the lines more – you could try a dotted or dashed line for the blue connectors? You have put a lot of thought into the gameplay dynamics of the map, now you need to help people understand how it works without too much studying.

This is a rough idea of the landmark/district colour idea that could be expanded on: GeneralFault wrote:Supersize: my map is based on the biggest limits:

apologies for the delay.

the map probably does not need supersize. when i say this, i'm thinking mainly of those who use phones or older monitors when playing. the larger the map, the more scrolling they need to do.

the large number of lines makes the map look very confusing at the moment. do u need to use all 80 quartiers? would it work with only 60 quartiers, with the "missing" quartier in each arrondisement being the most famous one (represented by the landmark)? this would reduce the number of lines and allow u to shrink the map.

u can also expand the city centre to make it less cramped, while reducing the suburbs, to fit 630x600 for the small map. to show u what i mean, here is an example i made. it looks horrible because i expanded the centre far too much, but i think u can do better. 600 height is certainly achievable without difficulty, even with 80 quartiers. 630 width is a bit more difficult. 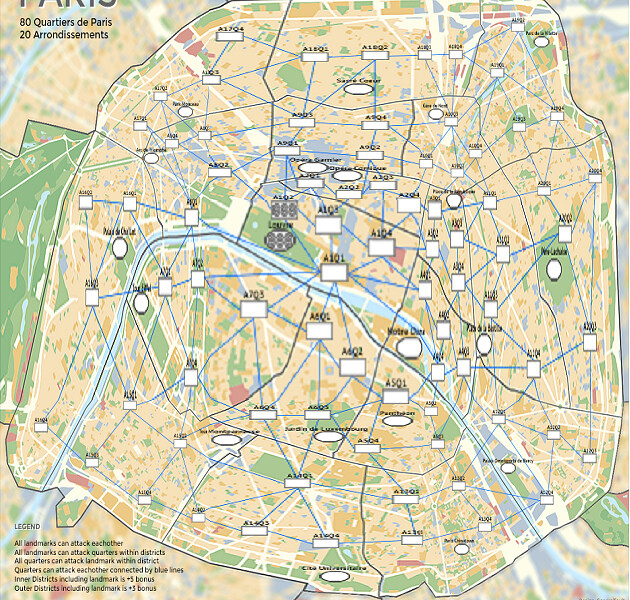 Paris mayor to wipe three arrondissements off the map
Paris Mayor Anne Hidaldo said on Friday that she plans to reduce the number of arrondissements in the French capital from 20 to 17 in a bid to simplify life for Parisians.
http://www.thelocal.fr/20160129/mayor-p ... -paris-map

we can tak a leap into the future!

Paris is one of my favourite cities, and I'm glad to see another attempt at making a map of it.

However, there's no way I would ever play on a map this size, that fills almost the entire screen. I like to be able to have the map and the menus on the same screen. It would frustrate the hell out of me to have to scroll off-screen to look at the Overview and then scroll back to the map. You have to be able to compress the information so that it fits into a reasonable size, or it will be unplayable.

i will overthink this!

for our map, i prefer 20 arrondisements, not 17. this is because some of the most well-known places are in the four arrondisements that hidalgo wants to merge together into one.

Also make a mini Paris map too, Just the arondissements: 20 terrs. Something fast and fun. Some of the arrondisements could have major landmarks with special play features: bonuses, killer neutrals etc. More small maps are needed. Doodle and Luxembourg are overplayed.

Thorthoth wrote:Also make a mini Paris map too, Just the arondissements: 20 terrs. Something fast and fun. Some of the arrondisements could have major landmarks with special play features: bonuses, killer neutrals etc. More small maps are needed. Doodle and Luxembourg are overplayed.

holy f*ck, vegetable lasagne - take a look around before you post, maybe...

llama, you are an idiot.