In addition to the water expedition territories which start neutral 3 (Amundsen) or 2 (other); Alert, Amund Ringnes, and Disko Island will start neutral 2 to prevent bonus drops.

Start positions on King William Island and Devon Island to prevent +1 start bonus, with Quebec as a dummy. 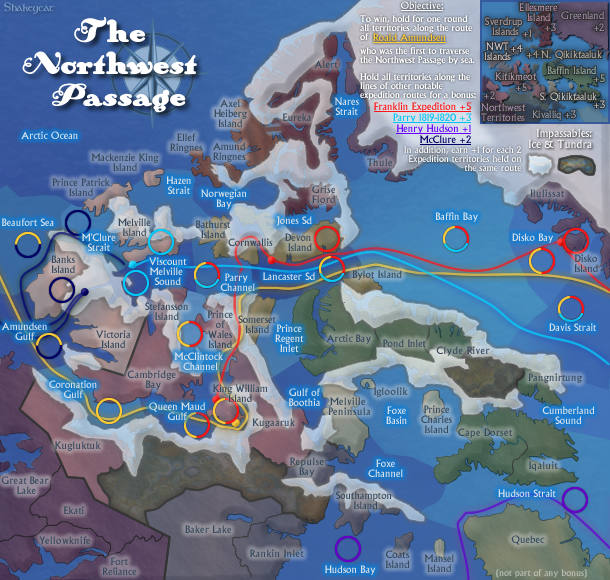 So any continent bordering a line can attack across or use the line to attack something else on the line?

Well the transparent ice is a nice idea, but as an impassable it doesn't quite work, it kinda drowns to the background... it's too hard to see where the borders are impassable and where not.

You need to simplify the visual style of the map somewhat. And make the ice more easily noticeable.

Other than that I really like this. Good first draft. Submit design brief.

if you make the ice look broken/cracked and more white it would work as an impassible, as a watermark effect it is nearly impossible to tell where they are.

In general I do not like maps where the water is territories. It works in great lakes because the lakes behave like capitals, and it works in ...

OMG I LOST A MAP. WHERE THE HELL IS IT!? Alexander's Empire, holy crap what happened to my brain?

It works in Alexander's Empire

because it opens up very necessary attack routes that add to the gameplay.

In this map the water is deceptively well thought out, so I applaud you for that.

Nares Strait for example gives N.W.T. a much needed common point of defense that a continent worth 1 would really need, and much of the other water serves as defensive points for island clusters that are also worth 1, such as Hudson Bay. I'll need different ice to be able to tell more.

Anyway, yes this is worthwhile. You probably should have posted earlier drafts though, the earlier in development you start posting in the foundry the faster your travel through the map making process tends to be.
Warning: You may be reading a really old topic.

I like this look of this map, though the territory number is a little out of what I usually enjoy playing on. But I'll be watching the development of this map.

Lzrman - No, the lines have nothing to do with actual accessibility.

Natty, I'll have to experiment with this. I liked the transparent because you don't lose the lay of the land. I didn't start out with any ice, but after mapping all the territories, I found that some had ridiculous borders (see link below). Besides, it is realistic that many water routes would be blocked off in winter. What is still unrealistic with the 'ice' is that it blocks off land routes.

Incandenza, Franklin Expedition was actually the inspiration. I'd like to have that one in here!

Coleman, broken and cracked was the initial idea, since it would be most dangerous to cross. More white, right, since that's what it IS after all. And yeah, the water territories in Alexander's Empire freak me out a bit. One of them has 11 borders. I carefully drew the 'ice' to cut off these crazy borders. My most-connected territory is Arctic Ocean at 7.

The earliest version I have online is here:
http://www.atomation.com/~thazzard/fun/nwp/nwpass113.jpg

It isn't much different, but I had to figure out how to solve all the territories that had too many borders. Baffin Bay had 13, Norwegian Bay 11, Foxe Basin 12. And then many islands have only 1 or 2 borders. If the map was made without water, it would be a massive web of improbable bridges.

Andy, it multiplied as I added places with actual populations and tried to eliminate extra borders. I understand the point though. It would start with 7 armies each in a 2 person game, and take time to sweep the other guy completely.


With completely opaque ice, for the curious: 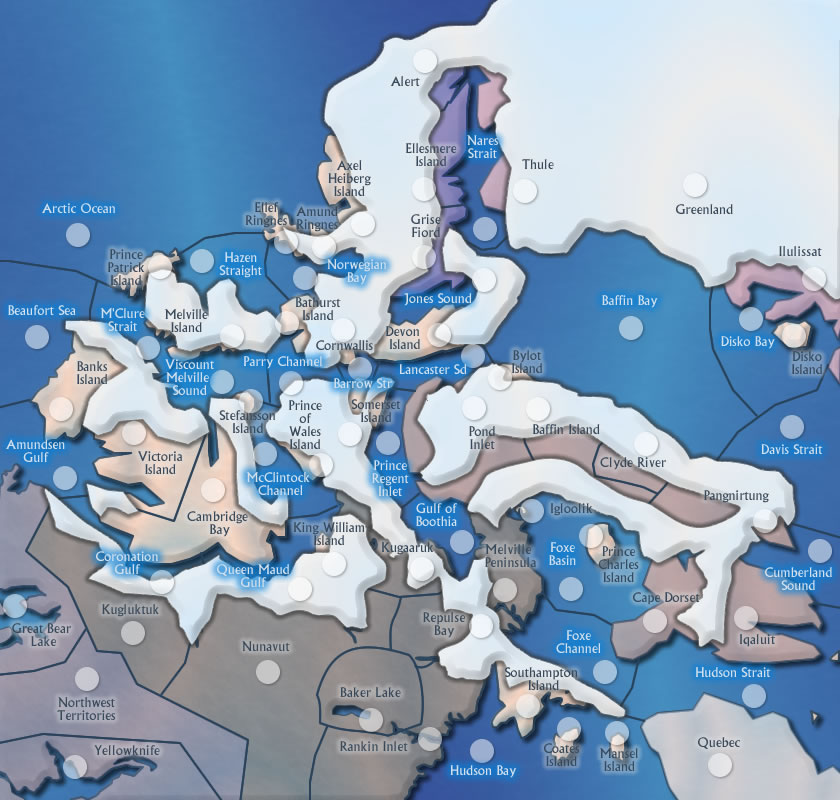 Some of the oddness can be avoided by simply moving the ice's borders to give a clearer piece jutting out.
Current Map Project: Tokyo

Doesn't look like much activeness, perhaps people just have not seen it and had a chance to review it

Here is where I am at today.
- Toned down textures, made ice texture more even.
- Ice is white and has a grey glow below it, seems to stand out better while not losing transparency.
- Fixed the mess in Greenland - gaps in the ice are way easier.
- Passages: I added a few for fun provided they do not overlap too much and are visible. Hudson interferes with nobody else, Franklin is epic. Thule Expedition isn't on there because it is simply so vast, but I have it mapped (hidden) just in case. Manhattan is more recent than the others, but I like the way it cuts through a seemingly obvious straight line.
Amundsen, as the first to travel the Northwest Passage, is the Objective. It totals 11 territories, the same as Route 66's objective. Though it passes through iced areas, those territories just happen to connect in another way (unlike Manhattan's path).

Bonuses are not well thought-out yet.

Things still seem messy at Barrow St. It's so busy.

Agreed on your own critiques, particularly the bonuses. Right now there is too little bonus, too much map. Perhaps look into a build-a-bonus on the water?

It's a little bit confusing in the middle of the map; I'm not too sure what connects to what... I've finally got my head to understand the ice as impassables, but it makes for a very confusing map

I think you should just use the one with the opaque ice. That one is way easier to understand.

I've been watching this map for a bit and probably should have commented earlier, even though others have said what I was thinking... the transparent ice is confusing as impassible (but very pretty)

Actually this map is very easy on the eyes and has an interesting subject. I think Natty is correct, you'll need the opaque ice however to make this map work. It's a shame as the transparent ice looks so nice- perhaps you can use transparent ice as window dressing rather than an essential part of gameplay?

The expeditions are a very nice part of the gameplay. Graphically, they'll probably need a little more clarity as well. Perhaps marking the army circles in some way to indicate that they are a part of the expedition bonus, with colored borders for each (and multiple colors for many, if I'm reading the map right).

There are a few other things, but really I think the ice needs to get sorted out before I can really get a firm grasp on this map.

I'm in agreement with most of MarshalNey. I like this map, it has a unique quality to it.

Ok... The ice looks nice. But now I'm stuck with the bonus areas, the colours you use are way too similar. I cannot find a single bonus area...

You should either a) change the colours or b) use a minimap. I'd prefer option b, as the colours do fit the theme.

I think Natty's right here- the ice is wonderful, and this map has me excited, but the bonus territories are too similar in color.

I'm not a fan of minimaps, however, so I'd vote for changing the colors.

Also, the sea borders crisscrossing the expedition lines get a little visually distressing.

But this is all graphics or graphics-related-to-gameplay stuff.

The idea/concept seems good enough. The look is certainly a very strong start. Why is this map still in the Melting Pot? 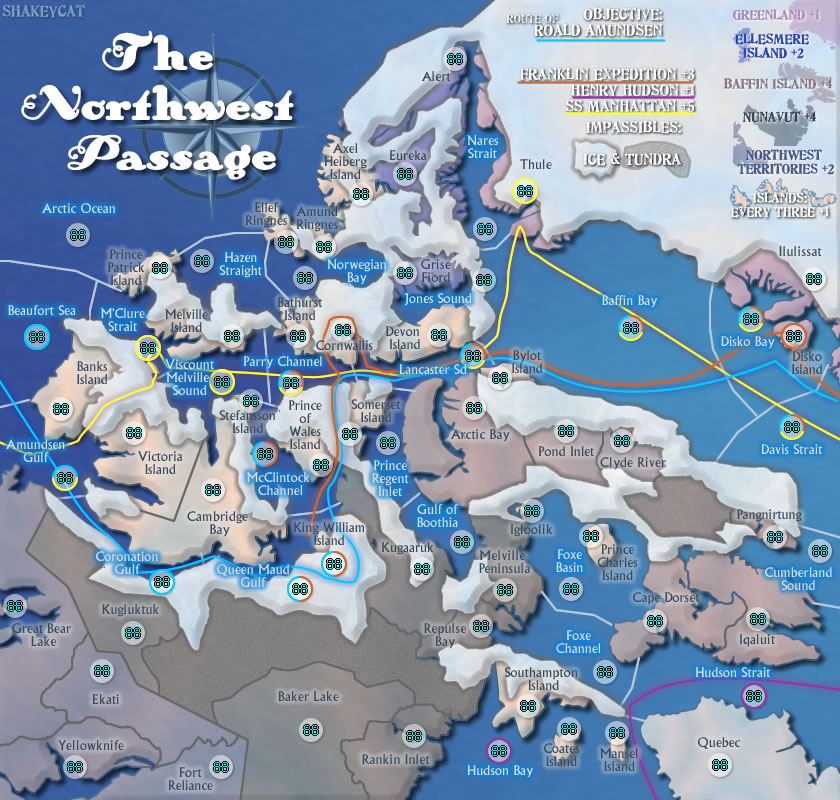 I could go for the same mini-territory style I used in Vancouver to make the bonus list, if it doesn't leave us looking too cluttered. The colours could change too.

It's still in the Melting Pot because I was very slow in getting my Design brief in.

Visually distressing ... ouch. I do need to work on those. What in particular is it about the crossing that makes it distressing? (or perhaps, which area makes your head ache most to look at?)
Current Map Project: Tokyo

Well, the lancaster - Parry channel area is kinda mind boggling. It's just too busy... I'd prefer just removing the lines and just using the army circle colours, like you've done in the latest.

As for bonuses, I don't know, I'd kinda prefer a minimap. The bonus areas are such funny shapes, it's hard to match the ones in the legend to the ones on the map IMO...

Still looks busy. I'd like to see a version with no lines at all. 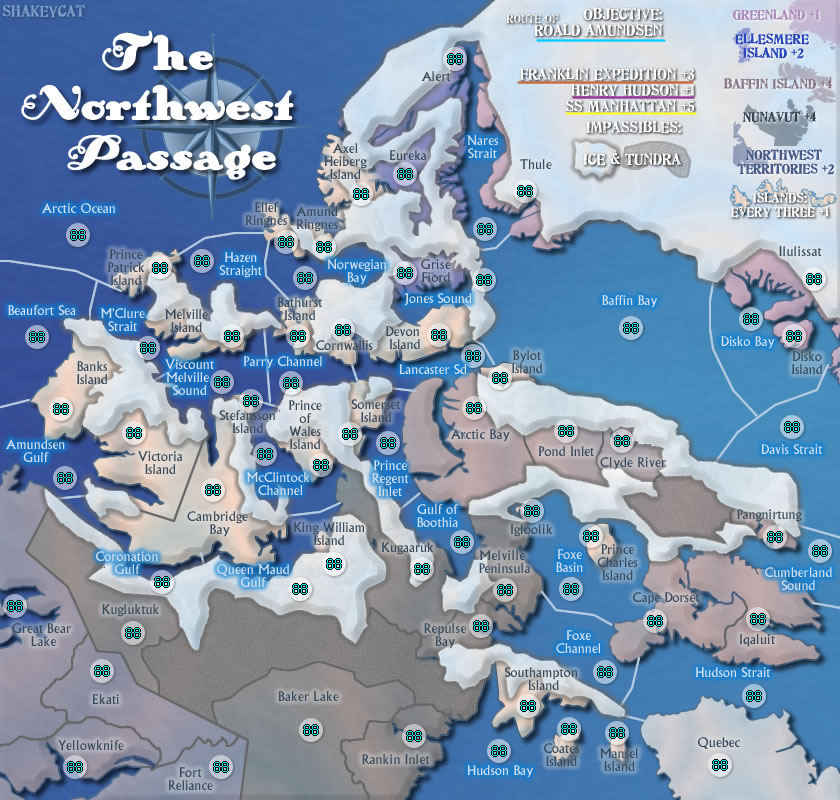 Well that does look much easier to read. I think you need to ditch the lines. Just use the coloured army circles like you had in the previous version, to mark the routes.

Also, some of the smaller territories that are surrounded by ice & water (such as King William island) could be made a bit larger, for legibility. It's allowed to botch the geographical accuracy slightly for gameplay/legibility purposes.

Also there's some places where you need to fiddle around with the territory names & borders so that they don't overlap. Viscount melville sound being one...

Also, Thule is a bit confusing, does it only border Nares strait or does it also border Baffin bay?

Made thin lines. If possible to make dotted lines in Fireworks MX, may try that too.
Current Map Project: Tokyo