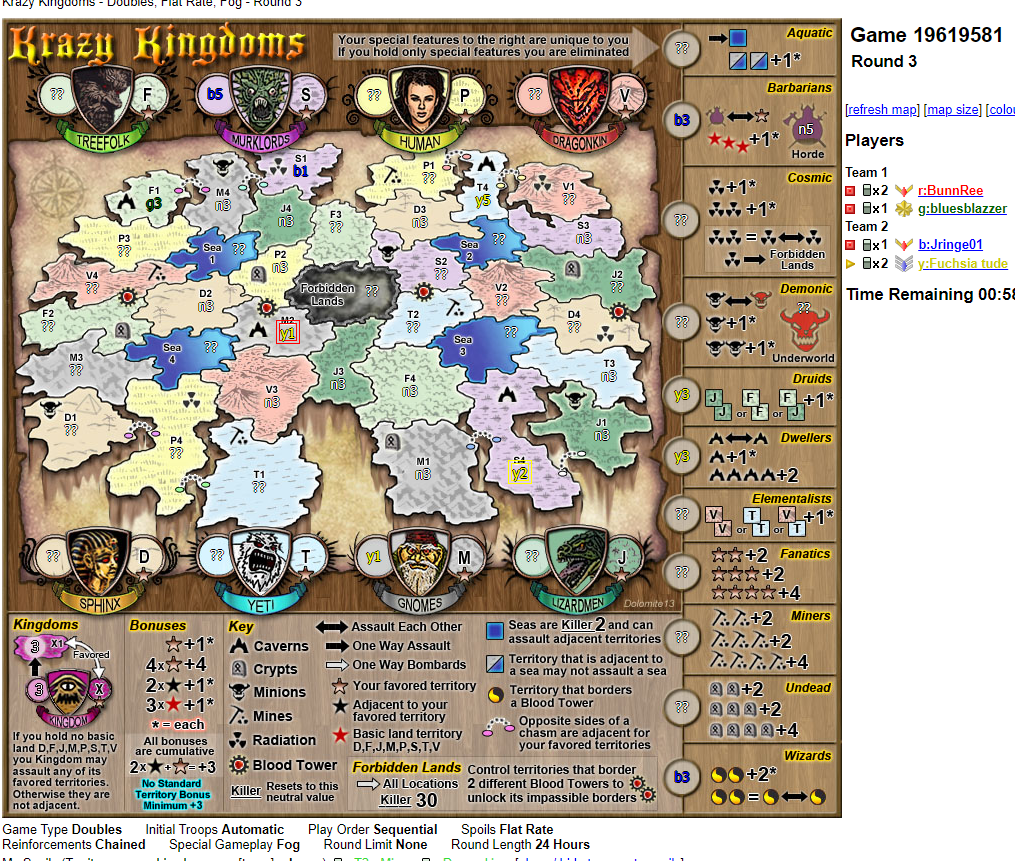 Re: [Beta] question re Krazy Kingdoms

how does this map actually work? can anyone please clarify? I appreciate any help. sorry, haven't been able to figure this out. i appreciate any info. thanks.

So you start with a kingdom and two special features, ( can be more kingdom/special features depending on number of players).
The special features ( regions on the right side of the map, Aquatic, Barbarian, etc... ) are "useless" region.
They are only here to indicate you which one you got, but you cannot attack them, or attack from them, and if you only got special feature you lost.

The kingdom.
From your kingdom you can attack your favored territories.

For example, if you have kingdom Human, letter P, from that kingdom you can all P territories on the map, P1, P2, P3, P4.
BUT ! You can only attack a territory from your kingdom if you have no territory on the map.
Therefore as soon as you take any of P1, P2, P3, P4 from you human kingdom, then you cannot attack from the kingdom anymore. Except if at some point in the game you have no more territory on the map, then again from kingdom you can attakc any of the 4.

Blood towers
To finish the game, you need to take the Forbidden Lands, a 30 neutral that can bombard everything, including kingdoms. That is the only way to bombard someone kingdom.
To be able to attack the forbidden lands you need to have two territories that border two different blood towers.
Blood towers is for example the red dot with black circle between P2 and M2, or between V4 and F2.

Tip : don't bother about forbidden lands until you have full control of the map, there is no point taking it before that. ( unless you're playing escalating then to do a sweep ofc).
Forbidden lands is a 30 killer neutral, ( it resets ).