Alright everyone, it's time to decide what country shall hold the title of the best in the Conquer Club world!

Basic Structure
This tournament will be a team event and played on the World 2.1 map with various settings (including escalating, chained; no spoils, adjacent; nuclear, parachute).
There will be no multi-team games. All will be one team vs another to ensure there is no teaming up.
All games will be fog to discourage outside coaching and the 12hr fog of war rule will be in effect. This rule just states that the starting team for each game, must allow 12 hours for the other team to grab a snap if they'd like. Turns may be taken sooner if the other team announces in game chat that they have their snap.

Score System
Top 4 qualify for the 1/2 Final, 1st will play 4th, 2nd will play 3rd.
If a team ties than the face off from the Round Robin will determine who takes the spot, if still a tie than the amount of rounds will be used. Same rules apply if multiple teams are tied.

The Semi-Finals and finals will also have a 7th game. Trips, no spoils, chained, fog in order to avoid ties.

Please say "I'm in" and for what country you wish to play for. Thanks! We think this should be a lot of fun once it gets going.

Team Lists - NOT locked (let us know if anything is not correct here, please or if there is anyone else you would like on your team - each team can have up to 12 members or additional that will serve as reserves only)

This is the first time I've used this program, but will do my best to keep up with it. I will also be creating a Google sheet to keep track of the score and will post that here as well. 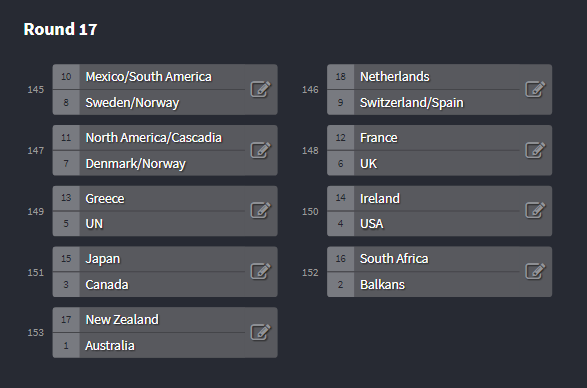 At least you forgot some

You should be more specific about the format and what games are played. There are 12 players per team but we fight vs 2 opponent?
Also the scoring system must be told.
I'm not sure it's clear enough for all.

You should start sorting all countries by continent then by foreign countries. I mean Ireland should go next to UK /Sweden, Danemark should go one after another......


Also 12 players per country is too high I think. Why this ammount of players, I presume only a few countries will be able to show 12 players! So you won't have a world cup, but a continent cup. The aim of the tournament is to represent your country, if too many people have to join another country because of low ammount of player, it won't be same fun.
BIG PRIZES! CSOP Hold'em
YOU LIKE MONOPOLY? PLAY IT on CC => CONQUEROPOLY
YOU'RE A MEDAL HUNTER? HUNT ALL THE MEDALS YOU NEED HERE!
BIG TRIBE TOURNAMENT VI NATIONS 2018 Things definitely need to be worked out, I agree there. We're shooting for a start date of the 2nd week in December so this is all kind of preliminary as we gather information on who is interested, etc. Yes, we may have to do smaller teams here so more countries can be represented.

Basically, what we're thinking is that each round one team will fight two opponents. i.e. Team A vs Team B; Team A vs Team C; Team B vs Team C; Team D vs Team E; Team D vs Team F; Team E vs Team F and so on
Each match up would be 3 games. Let's say we had 10 people per team, we could do 2 trips and 1 quad per match and everyone can then be utilized in one game, meaning only two games per person per round. The placement of the players would be determined by the team captain. Some people hate playing escalating, so obviously those people would be on the map with the other settings.

I know that a lot of things need to be made much clearer here. We're working on it.

Count me out if it starts before the holidays.

the 12hr fog of war rule will be in effect.

I have no idea what this is

ZaBeast wrote:Count me out if it starts before the holidays.

the 12hr fog of war rule will be in effect.

I have no idea what this is

You have to wait 12 hours before you play a fog game. So the opponent has 12 hours to see or snapshot the game.

Let's say we had 10 people per team, we could do 2 trips and 1 quad per match and everyone can then be utilized in one game, meaning only two games per person per round.

If you have 10 players for 2 triple and a quad, every player play only 1 game per round, no more.
If you want to play 1 quad and 2 triples (1game mini 2 max per player) a minimum of 6 players is required.

Some people hate playing escalating, so obviously those people would be on the map with the other settings.

So you have in mind to have different settings on triple and quad? right?

Ok and after each round, some teams are eliminated, due to scoring. you have to think you'll need always a multiple of 3 teams (3-6-9-12...) to work it out.
WIth 10 players per team, I presume you won't have more than 10 teams in total.
If so you could organize a round robin (every team play each other), with a same kind of scoring system. instead a system of round elimination.
If you go for smaller team, you will have lot more teams.
Just advices, good luck in organizing.

BIG PRIZES! CSOP Hold'em
YOU LIKE MONOPOLY? PLAY IT on CC => CONQUEROPOLY
YOU'RE A MEDAL HUNTER? HUNT ALL THE MEDALS YOU NEED HERE!
BIG TRIBE TOURNAMENT VI NATIONS 2018

Having a large player pool is not a bad thing. As smurf points out, not all settings suit certain players. Furthermore (and this is important) you cannot choose your countrymen, so what happens if you get a bit of a loony in your squad? Nice to have reserves who can replace that player. Also people drop out or become unavailable. It also makes the Captain's job a bit more worthwhile if he/she has a decent player pool to choose from.

I'd agree that 12 players is probably too many though, eight being a better number, but that's just an opinion. These guys have come up with a fun-sounding tourney which may become an annual fixture on CC. I'm sure they know what they're doing.

We are working all of these things out now and please consider the OP still somewhat "under construction". This has picked up steam rather quickly and though I knew this had the potential of being popular as soon as zeus presented me with his idea, it's still taken me a bit by surprise how quickly the responses have been coming in. This is my and zeus' first time hosting a tournament so please be patient with us to start. All of the advice is much appreciated, but we'd prefer any further issues be directed to us via PM so as to save this forum for mostly people stating whether they would like to participate and for what country. Thanks!

I'm in, USA is who I play for please.


Also will consider your clan if you need a member, permit team rally calls and call out of manginas.

I'm in. Spain, with joshzam!

count me in, double dutch,so will play for the Netherlands. Cheers
Thx for the invite

I'm in for South-Africa

Thx for the invite. Australia please.

I have heard of the FOW rule, but never played it. What happens if I take my turn before the 12 hours?

I'm in for Denmark

I have to say i think 12 player teams is very ambitious. At the moment I have 3 confirmed plus myself.
I have four more that might be interested if the game count is low enough.

Personally, I would say 8-player teams playing 2 or 4 active quads games at a time would be a good limit. Meaning that each player is in 1 or 2 active games at a time. For now, I will tell the maybes that the game count is 1 and see if I can get a 10 player team together as you suggested...

Also, can you confirm that the stupid 'no forts' setting will not be used?
And there will be no trench either? Because obviously that would make the games last much longer.

were early in the registration process i went threw the greek members sent link to the event and im sure there are a lot of greek residence in the uk .. usa.. and canada that have not found this event as of yet ..i can confirm the no fort option is not in play however trench is as its a highly requested setting i think team greece will fill give it some time pls best of luck in all !!! if u know of a greek player living in those 3 regions feel free to invite them and u have sotan that guys an insane team m8 [heeheeheeee]

Yep, sorry folks, only now have i had the chance to read the whole other thread. So, I see some of my questions were answered already.

You can add bebis72 to Team Greece and I've sent a pm to the rest...

I'll play for Norway if needed (or wanted!)

Bad Dice Clause: If a team feels the game was lost due to dice and not superior strategy, dice stats must be posted in game chat and the game will be reviewed by groovysmurf, zeus111 and all team captains. The game will be recreated if the majority votes that the dice were biased. This rule is to ensure the utmost fair level of play.

In for the Aussies..