Follow on from the other thread. Here's the latest version of the Ireland map. 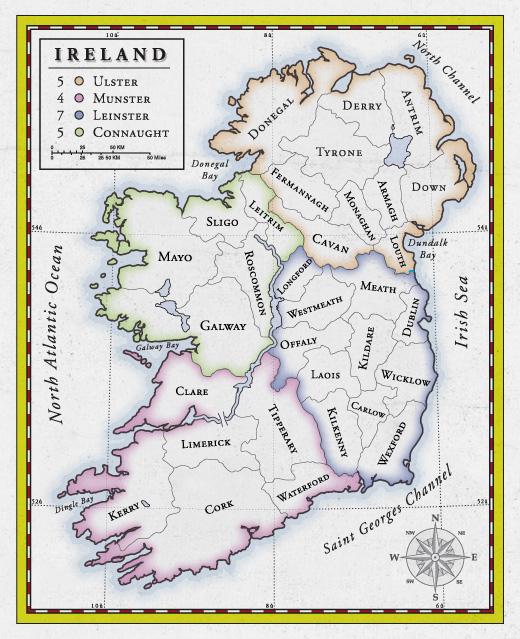 did you make that yourself? It looks really good. It looks kind of like an old map.

Nice... the Clare link looks a little dodgy, but not too bad... I can't think of any better way to do it anyway. Some borders for Leinster are still necessary imo. 7 border countries is a little much... In the classic map Asia has like 5 (I think), and that can be cut down to 4 with Ukraine.

Yep, made it myself.

I spent a bit of time looking at scans of old maps for reference purposes to try get the look I wanted.

qeee1 wrote:Nice... the Clare link looks a little dodgy, but not too bad... I can't think of any better way to do it anyway. Some borders for Leinster are still necessary imo. 7 border countries is a little much... In the classic map Asia has like 5 (I think), and that can be cut down to 4 with Ukraine.

Yea, I'm not sure on the whole Shannon idea at all. Just playing around with ideas. I don't know if it adds anything to the playability of the map.

I don't thnk Leinster's going to gettable really. It may be the battel ground. I'd really like to try a few different optiosn to see what works. Still all thoughts welcome.

You've got talent on the graphics end anyway...

Woah I just noticed Louth is in Ulster... which is actually not a bad idea now that I look at it. It's an odd one to call what you should do really, I never really get a feel of maps 'till I play them. One of the resident map "experts" will probably have some more constructive criticism.

Still looks great, aesthetically. You might want to make the river a little more visually obvious, although that's probably just nit-picking. Also, the Waterford/Wexford border might be a little hard to see, since it's so small and along a bumpy coastline. Oh, and what's that blue dot on the coastline between Meath and Louth?

Mechanically, I'm not sure why Ulster and Connaught are the same value. With ten countries and four borders, a bonus of five isn't unreasonable for Ulster. But Connaught appears to be just five countries with only two borders. I can't see that being worth more than two or three armies, personally. I also agree with qeee1 about Leinster's number of border countries, although you could make an argument in favor of it if it's intentional.

Jot a- someone pointed out that Connaught can be attacked from 3 'continents', whereas Ulster can only be attacked from 2. That evens then out even though Ulster has an extra border 'country'

qeee1 wrote:Woah I just noticed Louth is in Ulster... which is actually not a bad idea now that I look at it.

Woah - that's a total mistake. Sheesh, I'm ashamed I made that one. eep.

Really can't praise this one for it's aesthetic merits enough. All it needs is a badass sea-serpent and it's Olde Schoole.

Shouldn't there be an apostrophe in St. George's Bay?

Well my argument for Louth being in Ulster would be that it reduces the border countries... it doesn't bother me, but some would probably kill you for it.

---Definitely one of the better maps I've seen for visual quality. The colors are well chosen, though perhaps a little more of them in each continent, just to alleviate any problems there may be in deciphering the current borders. Most maps seem almost too dark, this one has the opposite problem. It feels almost to light and bright. Along with adding a touch more color to the continents, perhaps the water would benefit from an increase also. Also, I love the font chosen.

---Legend could be a little larger. The names of the continents should be very easily read. Is there any particular reason you chose the reverse alphabetical order? Perhaps another order of decreasing/increasing bonus or moving down the map would be better suited.

---Border thickness between the countries should be amplified a bit. As it stands the are merely faint lines, and perhaps a boldness would increase the appeal.

P.S. there is some weird light blue line on Louth, near the Bay.

---I count only 32 countries. This kind of is a rough number. To keep the map small as you currently have it, 36 would be a better number to shoot for, and there are many obvious spots for the few extra countries. 36 countries will have only have 1 scenario for neutral countries, rather than 3. Places for the added countries: Split up Galway, and perhaps Mayo. Cork and Kerry can also be split. This would give you the great *36* countries. But in adding countries to those continents there is nearly an elimination of a small continent. Perhaps one should be added to either Ulster or Leinster.

---Ulster~~ 10 Countries; 4 Borders; 4 Attack routes. As it stands on the map it is doing alright. Justification is there for 5.

---Munster~~ 6 Countries; 3 Borders; 5 Attack routes. Adding the 2 countries within its borders would then make it 8 countries. I think if that is done it would help increase a little playability of the map, without drastically changing it. Bonus of 4 would be alright.

--Leinster~~ 11 Countries; 7 Borders; 5 Attack routes. This continent currently is in havoc. 7 borders barely justifies the 7 bonus. Easily you could knock off the Westmeath border, and Wexford. that would knock it down to 5 borders and 7 attack routes. With the continent that way a bonus of 6 would do, but maybe a 7.

---Connaught~~ 5 Countries; 2 Borders; 5 attack routes. This continent is absurd. A bonus of 5 is way too high. Knock that down to 3, maybe even an argument for 2, but surely no more than 3. If a country or two was added to get to the magic 36 number, I think 3 would still be a workable bonus.

Overall this is a great looking map. I think you did well using the impassable border toward the center of the map. Obviously this map is more smaller games, due to the only 4 continents, but I still could see a lot of fun being had on this map. Keep working on it, don't be in a haste to release it until it's done. Always my final advice.

Edit: And I thought that too Grim, about the apostrophe. I went and checked a few other maps, and it seemed common to leave it out.

Second Edit: Obviously I'm still working on the whole analysis thing. Thanks for the heads up Marv.

But I assume its for games of 3-4 players... so no need for a gigantic continent of 11 countries. I would like much see this map with 5 continents, is it possible?

Andy, you are counting wrong the number of routes... in fact, you should count the number of countries that can be attacked from the continent. Because, of course, a player will not defend Offaly, Laois, Kilkenny and Wexford, if he can defend only Tipperary and Waterford. But, obviously, you are right: Leinster is a useless continent, and Connaught bonus is absurd.

---If another continent was added it could definitely be added upward in Ulster. Could make a "Northern Ireland" since that is up there. But then that make make Ulster a mute continent, depending on how the divying up went.

Perhaps something similar to this (though obviously connecting the purple) http://www.cultureireland.com/maps/img/ireland.gif

I'm still looking around at other Irish maps to see how other divying processes could be made.

I think you should do everyone a favour and remove Cavan from the map altogether.

rocksolid wrote:I think you should do everyone a favour and remove Cavan from the map altogether.

Ha ha! Are you talking in general or just about Conquer Club?

I think if you're going to split a continent it should be Leinster... Between Dublin and Wicklow using the Wicklow mts. and accross... somehow.

The "Northern Ireland split" just doesn't work unless you find some way to join purple... and that's very awkward. Plus by splitting Leinster you're killing two birds with one stone.

I disagree with what Andy said about the visual style, the colour looks just right, and the names need to be rougly the same size.

Oh, beautiful! On visual side, though, I would appreciate a better visibility for water as an obstacle. Also, the blue continent is quite close to the shade of water, maybe a slight modification on it or the water colour?

Obviously Leinster would be the prime place for splitting, I was simply looking for a natural area to keep in sync with the map. Leinster is probably the way to go if you are looking to add another continent with various rivers and any other geographical features that are there. Caution though, be careful of the split, for it might give too much power to Ulster, if it can easily knock down it's borders to a very low number.

And if all the names need to be roughly the same size, then others simply need to be decreased in size (Mayo, Galway). I was just trying to keep a balance in the visual appeal over the map. It just seems like as it stands on the map the larger countries for the most part have a slightly larger name, so I merely suggested boosting the names of the other larger countries to balance the appeal. 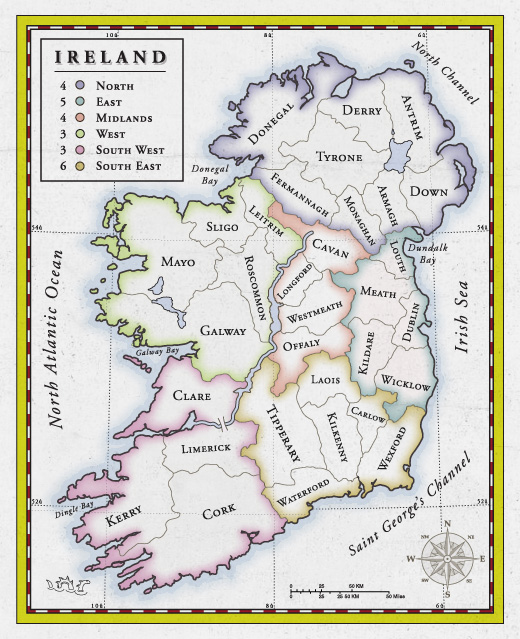 I decided to ditch using the provinces as 'continents' and broke Ireland up into various different regions instead. I think it'll make the map a lot more interesting to play.

I'm happy with the look now at this stage, so unless you spot a problem I really only want comments on the layout of the counties/regions and bonuses.

I'll try to get back to you on bonuses and regional borders later when I've more time, or Marv or someone else will get into that more with you first off.

But I must suggest one thing.

'Directional Area Continents' stink!
Get rid of those names. Stick with some sort of regional name, perhaps using the most popular/biggest territory as the name of the continent. But surely...get rid of those directional area continents. Biggest gripe of mine. But other than that the visual appeal is there and I think little more has to be done to that aspect of the map.

That's what the regions are called, so thanks for the suggestion, but they're not going to change.

To his and her their own, but I feel it lacks creativity--which your map currently is flourishing in. Detracts from the over all feel of it.