How do you expect it to all end? Earthquakes? Hurricanes? The robot revolution, or an infestation of voodoo zombies? Political upheaval, a return to Luddism, mutant corn monsters, or just a good old fashioned nuclear war?

Well, now you can have it all. Introducing my latest project: "The United States of Apocalypse". 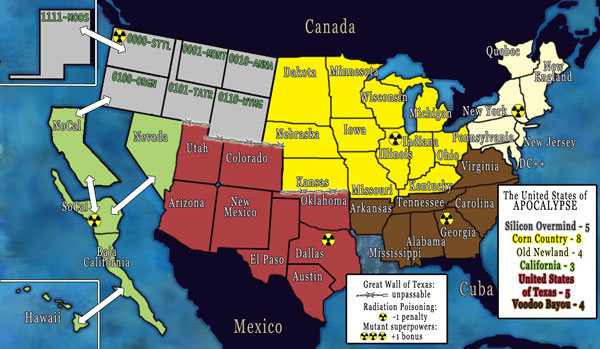 So the legends definitely need (and will get) some work, I'm not sure how legible the font is at the lower resolution, and I'll probably be adding some kind of artwork or backgrounds or something later. But this is the current draft I'm working from, and I thought it was about time to get some community feedback on it.

At this point, you might be peering curiously at those little radioactive symbols. Each country with one of those symbols is worth a -1 bonus to your deployment. Yup, a negative bonus. But before you get too angry about the unfairness of one person getting stuck with two/three/four of them at the start of the game, note this: for every three of them you own, you get a +1 (positive) bonus as well.

And that's combinatorical and cumulative: if you own five of them, that's ten different sets of three (as Cribbage players should know). You get both the -5 and the +10, for a total bonus of 5. Own all six, and you've got it made in the shade with a net gain of 14. Doesn't seem like such a raw deal now, right?

So I'm looking for constructive feedback and helpful suggestions. I'm not going to drop the central gimmick, of course, but I am interested in hearing what people have to say, both about it and (of course) about the rest of the map.

The idea behind it is great... i like the idea of the radioactive -1 penalties.. adds a whole element. im all for it...

I'd play it when it's done.

cool.
I think we could have some more fun with the names, though. You made a nice start with some...
If the south is going to be called voodoo bayou maybe the states could be called something to match: Dark n sore, No Virginia, Georgedubia, Messisippi, etc.
Old Newland? think corny fake medieval: Ye Olde Englande, etc.
I'm not from round these parts, so I won't have the best actual suggestions!
Superman wears 'Fluffybunnykins' pyjamas

pretty cool idea. I like the radioactive symbol thing, it's good to get new ideas on maps as opposed to just new maps....

I'm not sure, what if you start with two of them... you're basically crippled the first few turns.

Just to check my stats the bonuses would be:

You do have a point there Quee, as it is now it would just destroy anyone who started out with 2 like that. Maybe you get a bonus if you have 2? or perhaps something else.....

ok, great idea, im a big fan, but im also TOTALLY math retarded, as in i have a hard time with 2 + 2 type stuff. could there be some way of making all the negatives and positives...simpler?
...where I'm from, we believe all sorts of things that aren't true. We call it -- "history"

Awesome, Jota. Not enough comedy in the map foundry these days. But if you don't pull Quebec out of this equation I will hunt you down in every game we play together, and that's a promise.

The lettering is particularly hard to read for the robot states right now. I didn't get the Tatr joke at first because I couldn't see it.

Those match my numbers. The other distribution I was thinking of was -2 per contaminated country and +2 per pair of countries. That would look like:

This would lessen the problem of starting with two, since A) you'd only be one country away from losing the penalty altogether, and B) you wouldn't be any worse off than the people with just one. On the other hand, it would make the bonus for holding five or six pretty immense.

Fieryo: I figure once I've settled on one distribution or another, you can just look at that little chart in this post to see how much they're worth.

rocksolid: But don't you want more maps with Quebec in them? We could add it to the North America map, and to Brazil, and to Tamriel...

I like the idea, but some questions:
Is really possible give negative bonuses?
Yeah, start with these negative things would be really terrible, so we need think about it... Is it possible always start the games with neutral armies there? Maybe only 2, since the neutral player got the -1 penalty

We really need think about a fair bonus, but not really that much... How about:
1: -1
2: 0 (it would make more easier manage the penalties, and also easier to f*ck your opponent

Now Im sure you are american, Jota.

I like this map.. I don't really have any good suggestions..
But I loved the Florida/Cuba thing..

such a good idea

This adds a new element, because now the risky players will be trying to hold an even amount to get their bonus, and the offensive-minded defensive players will be trying to knock out one of the contaminated to turn their potential bonus into a painful blow.
The only problem now is the unfortunate soul that starts out with 3 contaminated countries. They're pretty much dead from the start because they'll gain no new troops every time, and everyone else will know this and not attack their territories until they're dead.
I suggest perhaps making the contaminated territories neutral from the start. I think it would make for some interesting gameplay.

By the way, its looking pretty good. I like the binary, its a nice touch.
I'm only confused with the sequence, (assuming you did this on purpose), I'm seeing 0,1,2,4,5,6,15. I dont see a particular pattern, perhaps give it a fun pattern for anyone who spends the time to read the numbers?

I don't know how that negative thing would go. Someone just reported a bug in which a guy was somehow deploying negative armies and it got all goofy and would give him like 13923095 troops. I guess you'd have to talk to lack about that.

who/where did this happen?

its in the bug reports forum, i believe


---I'm always pushing to for people to create new ideas and features for maps. It helps make them unique, and not 'just another map'. That said, I think the radioactive area could be quite amusing in game play. Obviously first one would have to check to see if it is actually possible to have such a thing for a map. And if it is, the values would have to be reworked into something that necessarily wouldn't cripple the players or give them an extreme bonus. Also perhaps adding a black border around the radiation symbol, just to distinguish it from blending into yellow and some of the other lighter continents.

---Perhaps darker and foreboding colors should be looked into. Right now this map doesn't feel like the apocalypse. It feels kind of like the day before it. Bright, sunny, little care what so ever running through the mind's of the people.

---As someone else suggested, look for more play with area names. I've been hoping for some more 'futuristic' or 'Final Blackout' kind of maps. I think manipulating them could be quite hilarious and add a new element to the map. Two quick problems I see right away. Some areas in 'Old Newland' and Corn Country have names that are hard to read. Thrown in California and 'Silicon Overmind' also. Readability is tough issue right now. And focusing specifically on 'Silicon Overmind', I think the numbers in front of the names could hamper people who don't read so closely in the attack and fortification drop down menus. Perhaps if you put the numbers behind the 'word', you could still keep a general uniqueness but not have to worry about people complaining that they didn't want to deploy on 0001 but rather on 0000 or something similar.

---Obviously the water will be worked on and touched up, and you mentioned the legends also. To perhaps go with your theme, I suggest a dark legend, something perhaps ominous Maybe a border outline similar to the barb wire, or something that could help improve the visuals.

---Also I think you could do something more interesting in the 4 corner's region, instead of simply adding a manmade lake. What to add to that area, I am not sure. Maybe a garbage dump? Or an ammunition depot? Who knows. But I think something unique could be used in that area.


Hopefully I'll be back around to look closer at the countries, borders, and bonuses at another time.

The progression for the penalties and bonuses is a direct consequence of how the XML works. The formula looks something like this:


B is the bonus for holding a set, N is how many affected countries you own, S is how many you need for a set, and P is the penalty per country. "Choose" is the combinatoric function "N choose S". I can change the parameters (B, S, and P) but have no real control over the formula (or over who starts out with each country, neutral or otherwise). I checked with Lack before developing this, and he says that it shouldn't break anything as long as I'm careful.

Based on the comments that people have made, I think I'm going to go with B=2, P=2, S=2. That should be fairer than the first version, since starting with either one or two of them will give you the same deployment modifier, which means most players should be on the same initial footing.

As for darkness, I'm going for more of a black-humor feel than a genuinely dark feel -- sort of a post-apocalyptic "return to normalcy" kind of thing. Except with robots, mutants, zombies, and (of course) war on a massive scale. I'm working on adding some artwork that should help a lot with the feel; we'll see if that helps when I put up a new version.

Here's the latest version of the map-in-progress: 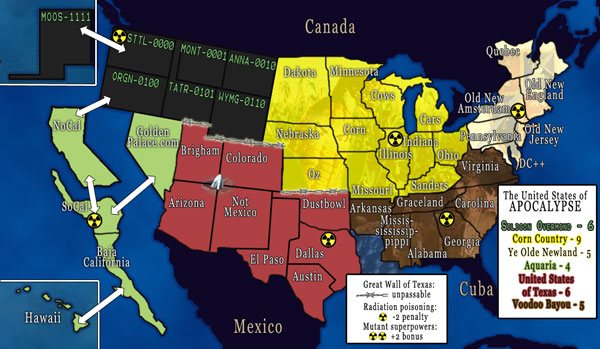 I've increased the ratio of joke-to-real state names, added backgrounds to a few continents, and made some other cosmetic adjustments. I also changed the penalties/bonuses for radiation like I described above, so the progression should go -2/-2/0/4/10/18. (I also upped all the continent bonuses appropriately.) As for fonts, Silicon Overmind, Aquaria (nee California) and Corn Country have been revised slightly.

Banana Stomper wrote:I don't know how that negative thing would go. Someone just reported a bug in which a guy was somehow deploying negative armies and it got all goofy and would give him like 13923095 troops. I guess you'd have to talk to lack about that.

But perhaps there should be a floor on the number of troops deployed, never less than three?

Yeah, I am still slightly worried about the whole only being able to deploy 1 man thing... not a lot you can do with 1 man.