It’s an election year, so I created this tourney to explore how the numbers game in the presidential race – the primary delegates and the electoral college.

I’m NOT looking for political debates during game play or in the tournament thread. In that effort, I’ve delved into our past for Presidential teams.

We’ll have 8 teams (three players on each team).

This tournament will be played in two phases.

PHASE ONE: THE PRIMARIES.
Teams will compete across all 50 states AND the District of Columbia.

Each member of the team will compete for votes across 15 states.

In order to enhance the team aspect of this tourney,
The six Super States (noted in purple on the list) with the most votes at stake will feature each member of the team in a 1 v. 1 battle, along with a team vs. team triples showdown.

For the bulk of the states ... The battle will be played on a correlating geographic map to that region and will include a three-match round robin on 1 vs. 1 games against the other candidates, along with one 4-player match.

Votes are gained by troop dispersal during each game. Win the map in a landslide and you’ll garner a greater advantage in the voting booth. Win a hard-fought battle and your voting margin will be smaller.

Accrual is capped after the 11th round of play to protect against stuffing the ballot box.

A player who wins in 8 rounds or less will add a 50% bonus to their number of votes.

In 1 vs. 1 play if Player 1 kills Player 2 not allowing Player 2 a turn in the kill round, votes for the attacking player in that round will be reduced to 33 percent.

The primary maps will be played state-by-state in the same chronological order of the real primaries.

Win the popular vote in your state and you will earn a guaranteed # of delegates (33%). The remaining delegates will be divided proportionally among all candidates that garnered at least 20 percent of the vote.

The winner in each party advances to the General Election.
Out of the remaining six candidates, the one with the most popular vote during the primaries will continue as an independent candidate ... thus giving us a three-person battle in the general election.

PHASE 2: THE GENERAL ELECTION
Play is similar to the primaries with one exception. A state’s Electoral Votes are winner-take-all.

Also, the order of play will resemble election night rolling from the East Coast across to the West Coast.

The team with the most total Electoral Votes wins the election and the tournament.

Include all three team members when signing up and be sure to designate a team captain. That will be my point of contact for your campaign throughout the tourney. 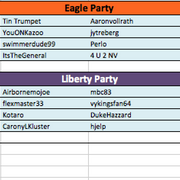 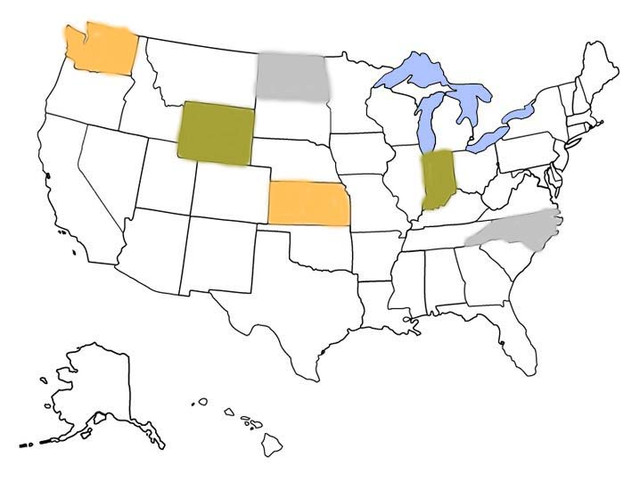 Here is a list of the states with their electoral vote values and their delegate values (primaries), along with the CC maps that will be in use. 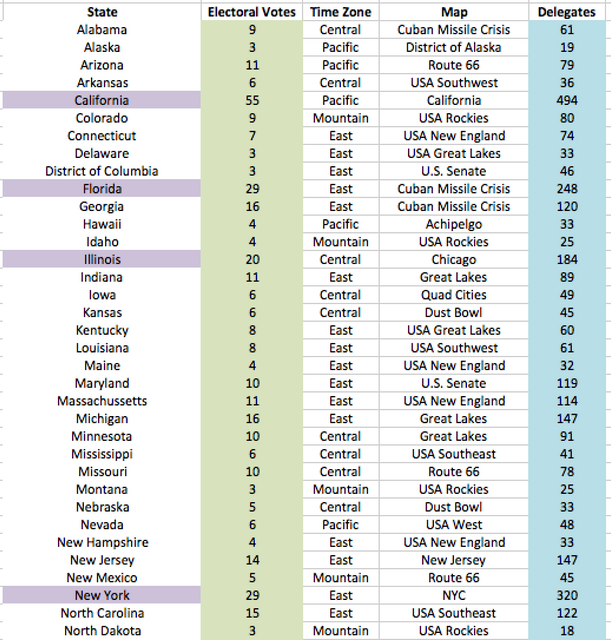 I call Dibs on Lincoln, gonna see if I can get some people together this seems super cool, flex. I'm glad you are back!

We've got two of a potential 12 candidates spoken for. Get together your 3-person squad and see if you can make the White House.

I'm in for this one, willing to join up on a team as I don't really have time to coordinate as a team captain.

If you want to sign up individually that is fine, I will pair you up with other individuals as available.

Of course, the best way to guarantee a spot is to sign-up as a team at the start.

Eisenhower has found his champions.

Sounds like a lot of games. How many are we talking about here?

It should be about 70 games per player on the team through Phase 1 and another around 50-60 maps for those players who hit Phase 2.

SirLindsley wrote:Sounds like a lot of games. How many are we talking about here?

Team list updated, we now have enough to at least play this tourney is some format. I'll wait and see if we can fill in some more candidates thought.

Note: Individuals can sign up and I'll assign you to a team once we have three on the waiting list.

I'll join, but I need partners

All right, I've got 2 individuals on the wait list. One more individual sign up and I can set you guys up as a team.
Current tourneys -- NFL season 2020, Presidential Election

I don't have a team but would like to join please

Flex I love your tourneys! So glad you’re back!

We will take TJ - hjelp and I are confirming our last player and I will post.

I'll take a look at those options. I would like to get a large-range of maps in the mix.

The site has quite a few city maps in the mix (some of my faves) ... wish we had even more, along with more state-specific layouts.

One of the things I love about this site though is the wide variety of maps and game play that is offered. Lots of creativity and lots of solid geographical maps.

CaronylKluster wrote:Flex I love your tourneys! So glad you’re back!

I've got you on the individual wait list. So you can wait for others to join or find a pair of teammates.
thanks and good luck

Shoop76 will complete the TJ team. Thanks!

We are halfway full and have enough to run the tournament with some minor alterations.

I'll leave it open for another week or so in hopes of getting the full allotment or at least a few more teams.

I'll play if you need, or have room for another single.

SirLindsley wrote:I'll play if you need, or have room for another single.

Still hopeful of getting at least another team or two into the mix.
I'll be looking to start this tourney here in a week or so.

Also, a heads up, if we have an individual player interested, I already have two on the wait list, so one more individual would make a team.
Current tourneys -- NFL season 2020, Presidential Election