I'd suggest Aquaria 2 and maybe Ye Olde Newland 2, Texas 5 and Voodoo Bayou 4. I think whatever you choose, Texas should probably have the same bonus as Silicon Overmind, as they're very similar.

haha wrote:no its not were richer then any other contrie in the world more jobs and we r the best

And our standards for literacy are top-notch!

Note that the bonus for each continent is intentionally one higher than it normally would be, to compensate for the fact that each continent contains one irradiated country: Aquaria gives you +3 armies for the continent and -1 army for SoCal.

Texas should probably have the same bonus as Silicon Overmind, as they're very similar.

Mmm. It's currently one higher because it has one more country and borders one more foreign continent. Anyone else want to give an opinion on whether they should be the same or different?

If only it didn't take so long to type, I would respond more!

---I'll just say, are you doing anything with white arrow connectors? Perhaps look into something more in tune to the map.

I like the way it is coming along! I look forward to being able to play on it!

haha wrote:well thats only some people but there r people who clean up after the eligal imgrants

was that in response to his literacy statement? He was mocking you, you know that? Right

About the bonuses, I believe Texas should have the same of Voodoo and Silicon (probably 6). And Old New England and even Aquaria could have a bonus of 4 (3 with the penalty) Aquaria is not that easy to hold, and ONE has 6 countries, so...

Marvaddin wrote:About the bonuses, I believe Texas should have the same of Voodoo and Silicon (probably 6). And Old New England and even Aquaria could have a bonus of 4 (3 with the penalty) Aquaria is not that easy to hold, and ONE has 6 countries, so...

I would have to disagree with all of that. I like his current.

maybe u should put negatives for owning 5 or more radiations. This would be a negative to a player who was dominating the game and give change to the weaker players.

I think this might be the final version (whew): 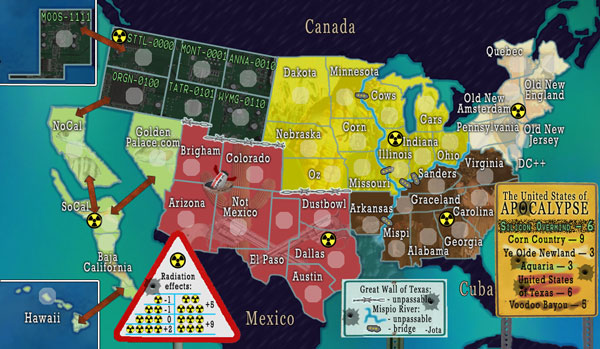 (Full-sized map hidden behind the link.)[/url]

I boosted Silicon Overmind, due to popular demand, but kept the Voodoo Bayou where it was (it's only got three borders). Since Andy suggested doing something with the arrows, I decided to go with a rusted feel for them. So, if no major issues are brought up by tomorrow, I'm going to go ahead and submit this as it is.

i personally think you should pretend louisiana never existed. You shouldnt have special water there.

---The United States of Apocalypse Map has reached the ‘Final Forge’ Stage. I've revived this thread from the pits of the Foundry furnace and have examined the contents. Nearly every major concern has been addressed. If there are any other current concerns, please make your voice heard. There will be two days for you to post any objections; if no one has posted any protest after two days the map will be deemed finished with the 'Foundry Brand' of approval and will be submitted for live play. If after two days there is still discussion going on it may continue until said discussion has reached the conclusion that the map has reached its final and polished version.

And to start things off...


--Really only a minor thing, have you looked into other images for the bridges? They seem more like Sim City road slugs rather than bridges spanning the river.


---Not all countries, especially continents on the edge of a map, are going to have more than one access point. Hawaii is a rather mute point. Now if Aquaria was larger, and it only had one route to get in, that would be a different story. And as it is, Aquaria has 2 border routes in..plenty for such a little area.

AndyDufresne wrote:Really only a minor thing, have you looked into other images for the bridges?

Folks seemed more or less content with the bridges (aside from the band-aid and visibility issues, which I think I've fixed), but here are some more options: 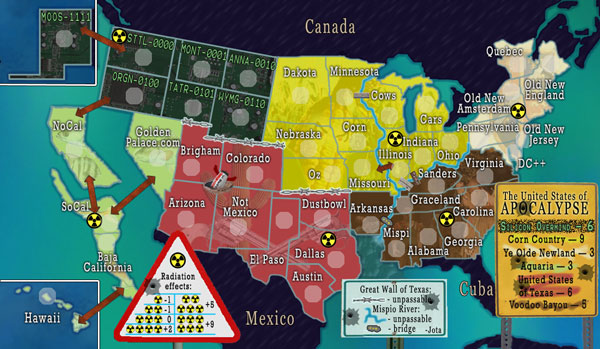 As you can see, they're generally not so great. The only one of the new four that I like at all is the arrow, since it matches the other arrows, so I could switch to that if people wanted. But otherwise, I'm inclined to just go with the "road slugs".

Also, Andy mentioned another thing to me: I haven't really been consistent over whether it's called "United States of Apocalypse" or just "USApocalypse". Before I formally picked one or the other, I thought I'd check if there was a strong preference on the forum between the two versions of the name.

---Well if you only want to use the arrows or the slugs, use the slugs please! (Though I particularly like the northern most one). This reminds me of the situation in the Middle Earth map, where people disliked the red dot connectors all over the map--I feel the same way about the arrows.

---As for the name, I like the longer one for the 'official' name, but the shorter one works well for discussion and the 'Start a game' page.

Road slugs are better and so is the longer name.

Longer name; for bridges, a variant on the Sanders bridge. The road slugs don't make me think of bridges at all.

Unsurprisingly, I suppose, opinions are completely mixed. So it looks like we'll be defaulting to the original version.