LATEST VERSION OF MAP AT END OF THREAD....

Number of Territories:44 - two start neutral, one being Jerusalem and the other the Ayybuid Caliphate (surrounding Jerusalem), leaving 42 to be allocated, all regions start with 3 troops. (In 2 player games - Player 1 initially allocated OO Makuria and EO Serbia and Player 2 OO Begwena and EO Empire of Nicea) 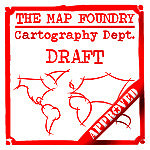 One would think Rhodes-Cyprus and Cyprus-Aleppo would also be common sea crossings. I suppose it's a bit premature to speculate, though. First we'll have to see what terts he divides the relevant empires into. Will Sicily be one tert or several, for instance.